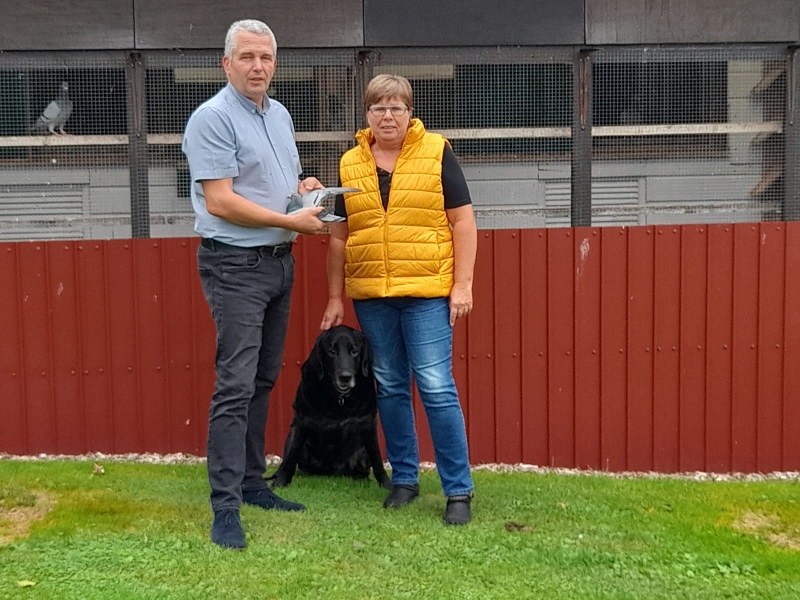 Today we present with you with the bird DV02884-08- 854, named ‘The Great One’ in reference to the Canadian ice hockey player Wayne Gretzky, one of the currently best breeding birds in German pigeon racing. 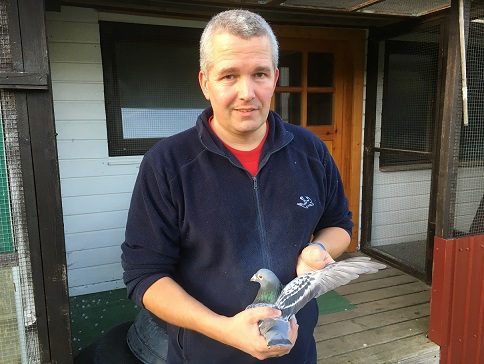 At the beginning of the nineties, the up-and-coming batting community Reinhold Werkmann and Norbert Kober from Dietzenbach with the bird DV04408-88-785 called ‘Speedy’ had a real exception flyer, which managed to win the first bankruptcy six times against large numbers of pigeons in the German program and also to pin an unimaginable number of other top prizes to his flags. As an equally successful exceptional pigeon, the ‘Speedy’ then presented itself in the breeding.
At an already advanced age, the batting community Horst & Frank Sander from Münster was able to acquire this exceptional bird at the end of the nineties. In 1999, the first son moved from the ‘Speedy’ to Frank Schlechtriem in Waldbröl, followed in 2000 by another son and a daughter.
These three ‘Speedy’ children should be among the top sanbers of Frank Schlechtriem until your death, even today ‘Speedy’ grandchildren like ‘Hermi’ or ‘Queens 411’ are among the absolute pillars of the breeding stroke there.At the same time, on the beat of Sander in Münster in the shadow of the Eurostar’s with the DV02884-04- 537, called ‘Speedy 537’, a grandson of the old ‘Speedy’ there developed into an exceptional flyer of the special class, he was able to place himself seven times against an average of 3,500 competitors seven times up to the third bankruptcy so that the magazine ‘Taubenmarkt’ introduced him as a topper of the month in one of your editions: 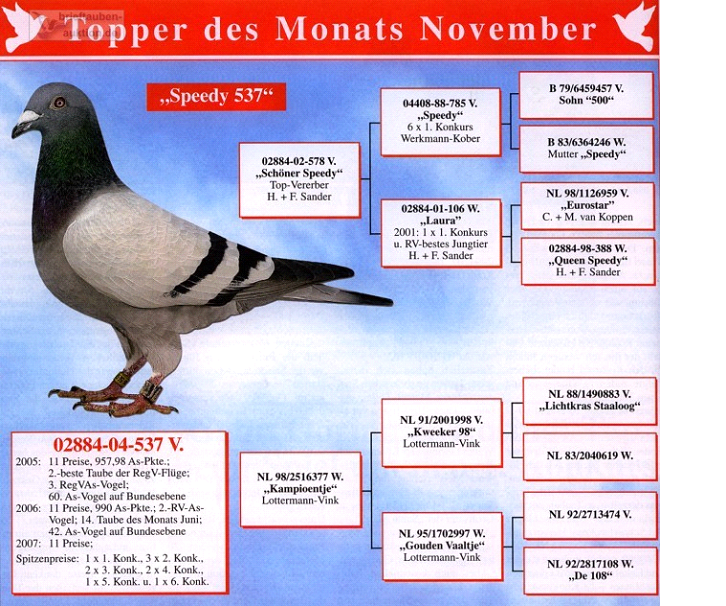 After the end of his career as a travel pigeon, the ‘Speedy 537’ switched to the breeding stroke at Sander and was paired there to the best that was to be preserved in European pigeon sport, a direct daughter of the exceptional couple ‘Little Dirk’ mal ‘Amore’ by Gerald Koopman, called ‘Dirks’ Amore’.
What heredity these pigeons possess is known worldwide, so is a direct sister of the ‘Dirks’ Amore’, called ‘Dirkje’, the famous täubin of the tribe of Jan Hooymanns and thus among others the mother of the exceptional bird ‘Harry’: 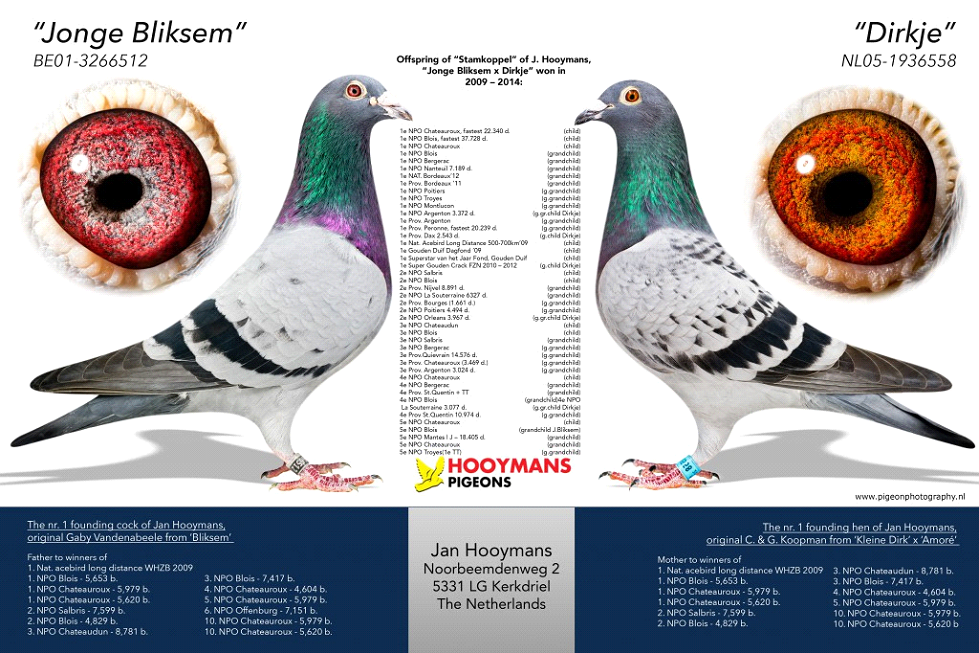 In autumn 2008 two children of the couple ‘Speedy 537’ x ‘Dirks’ Amore’ were sold by Horst and Frank Sander as part of a young pigeon auction, due to the success with the offspring of the direct ‘Speedy’ children, both changed to Frank Schlechtriem in Waldbröl, whose arrival there began in conjunction with the in-house ‘Queen’ line a success story began.
Already in the first nest of 2009 the bird of this pair, later called ‘The Great One’, put all its heredity. In 2011, his two children were able to finish with a full price number on 13 bets, while the bird with the final number 30 finished as the best bird of the RV, the female with the final number 31 was only relegated with 1,050 AS points by Schlechtriem’s own super-täubin ’60’, which represented Germany at the 2013 Olympics in Nitra, to the second place of the RV Best List. After an injury in the winter of 2011, the 31 was finally able to finish with 11 prizes in 13 appearances and 958 AS points after a mixed start to the season, including the highlight of the regional flight victory from Straubing 421 km against 8,162 pigeons: 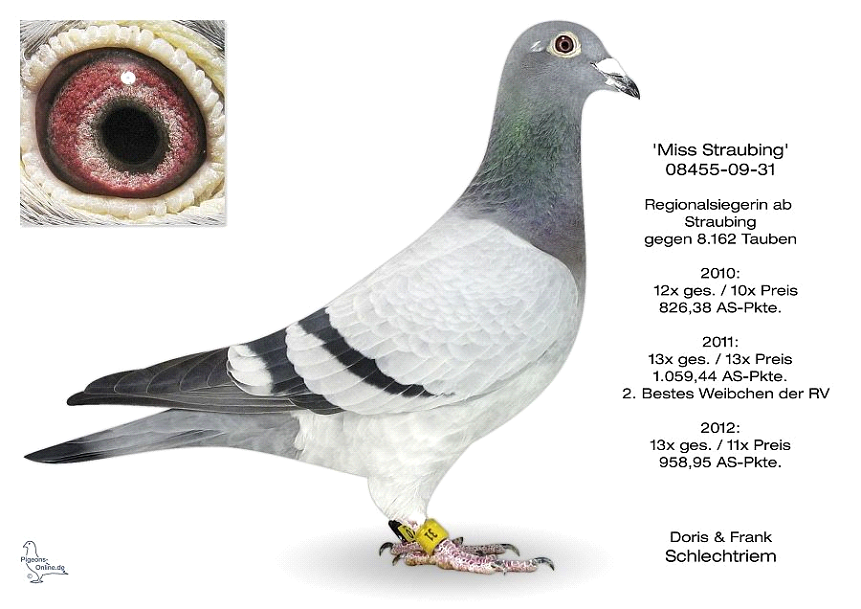 The ‘The Great One’ children from 2010 added another tooth while the daughter 239 was able to complete 239 in 2011 with a full price number on 13 bets as the Best Täubin of the RV and FG and also override the 1,000 AS-Point mark, the daughter 274 won the first bankruptcy four times in a total of only nineteen bets, whereby in 2012 she was the number 1 in Schlechtriem’s team with 4 prizes & 399.18 AS points. that the 2nd German Middle Distance Championship at the federal level was won behind the outstanding Wolfgang Röper. Unfortunately, the 274 had to be stopped already after the seventh prize flight of the 2012 season due to a slight wing injury, so she could only qualify as a reserve pigeon for the Olympic Games in Nitra 2013 in the category middle distance, with another top prize she would have been an integral part of the German team: 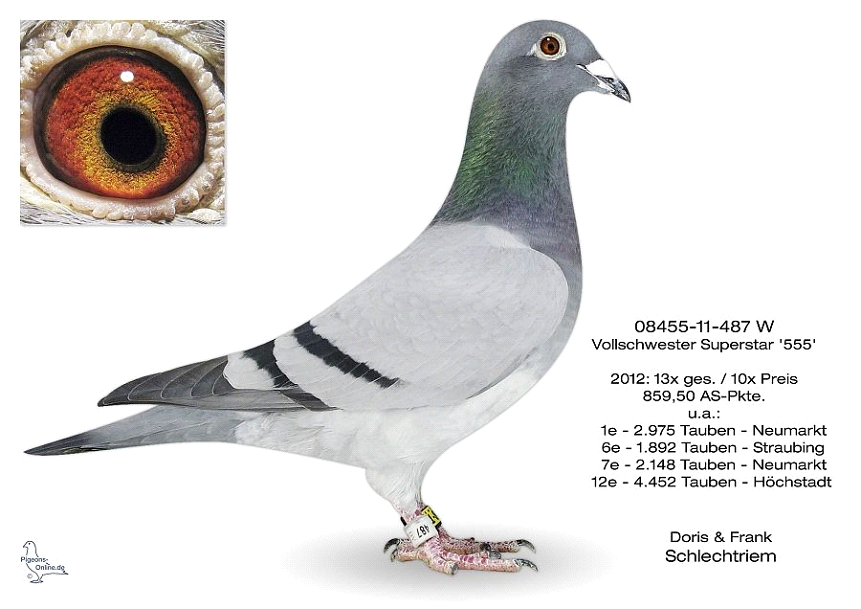 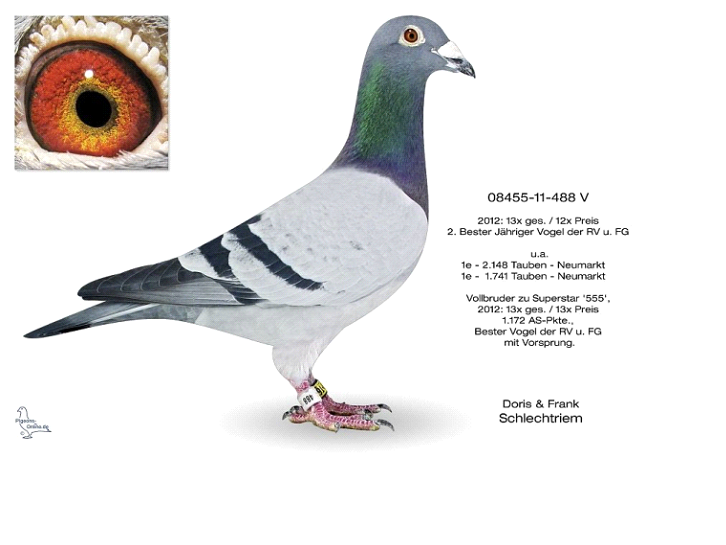 Her brother 488 flies the twice the first prize from Neumarkt and concludes in 2012 as the second best yearling of the company ! However, the golden shot only succeeded in the third clutch with the single child ‘555’, a stranger from a young age, who unfortunately became a victim of the bird of prey in 2013. The ‘555’ won thirteen prizes with 1,172 ACE points in thirteen appearances in 2012 as a year-old Bird, making him the best bird of the RV & FG, as well as he was undoubtedly one of the fastest birds in the Fr. Germany, only in the AS pigeon classification of the association he could not be ranked, because the regional association could not meet the conditions of the association in 2012. 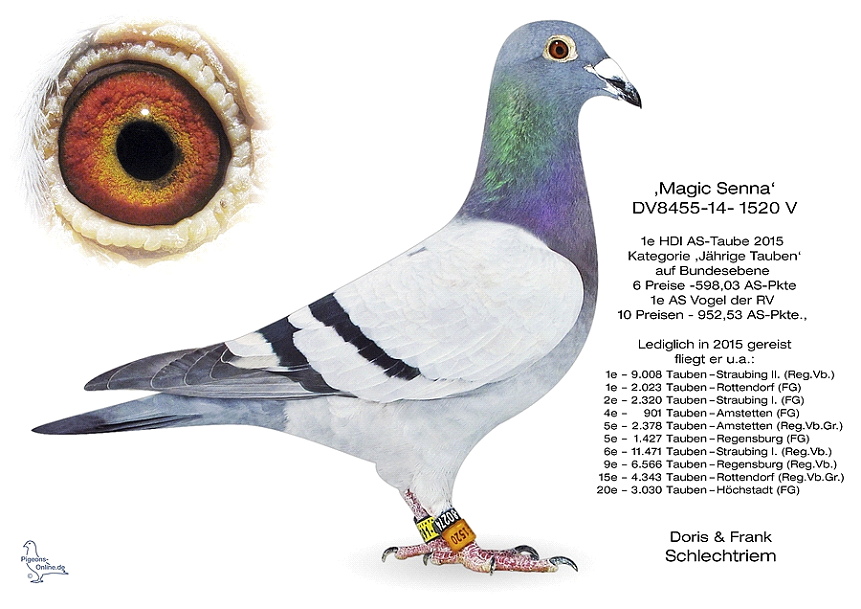 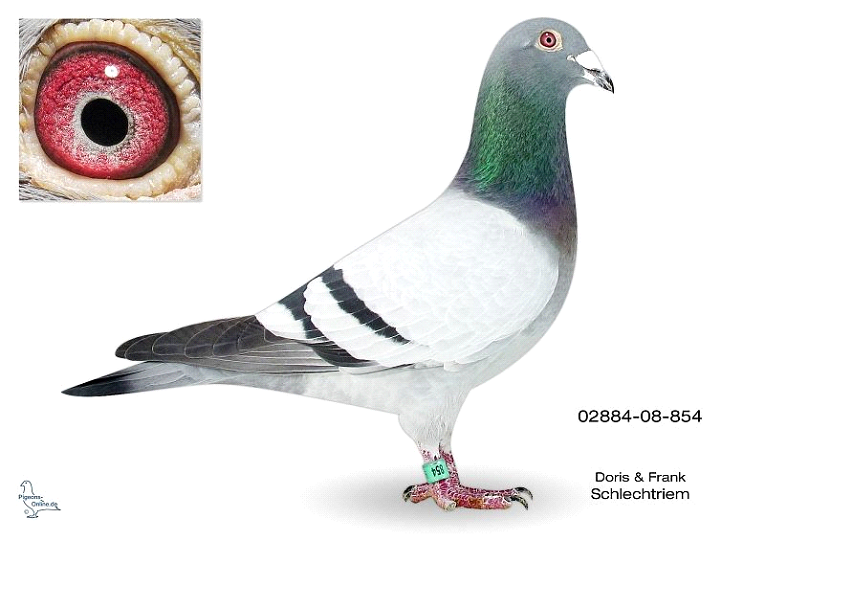 But not only the first generation of ‘The Great One’ is one of the flag bearers of the Schlechtriems, also the first grandchildren, who were tested from him, were able to convince immediately.
Thus, the grandson DV08455-12- 700 wins the first prize three times in 2015 and becomes 2e HDI-ACE pigeon of the year 2015 in the category Old Pigeons at the federal level, while the grandson DV08455-14- 1416 concludes as the best year-old bird of the RV: 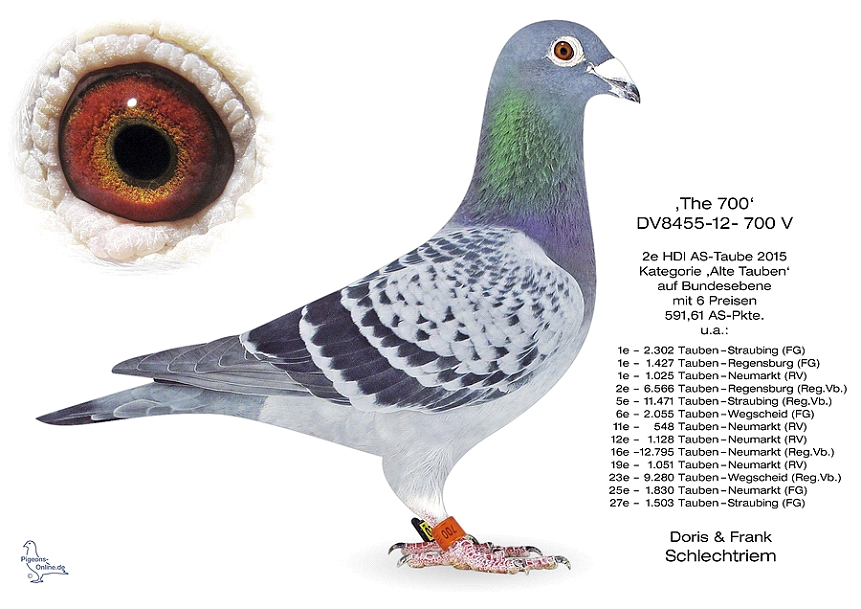 By the way, also the nest sister of ‘The Great One’ stands out as a hereditistic pigeon, she is among others mother of the DV08455-13- 1075, she wins in 2015 in twelve stakes twelve prizes with 1,029,55 ACE-points, thus she becomes the best deceit of the company and air community ! 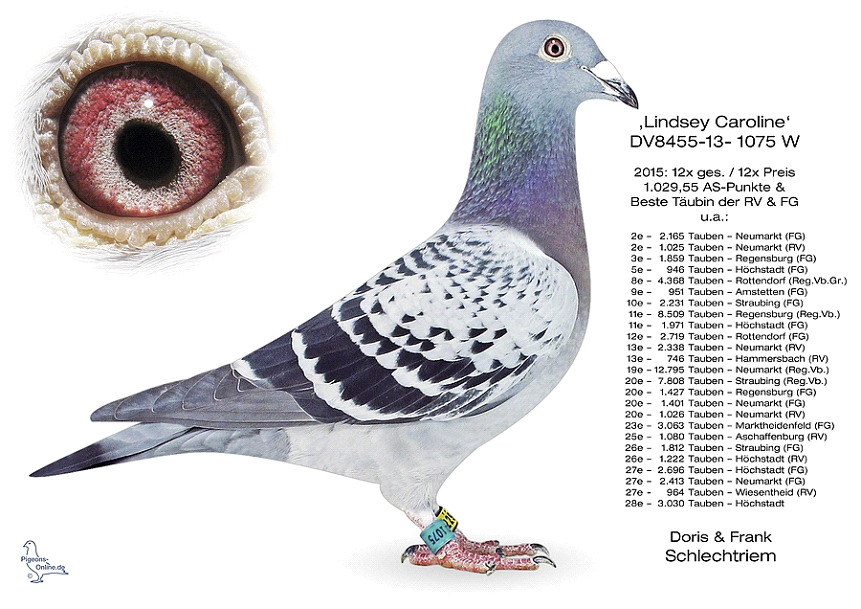 Update 2018
Descendants of “The Great One” dominate bad riem in 2018 – judge for yourself:

In 2018, the following of his descendants will also conclude by double digits: 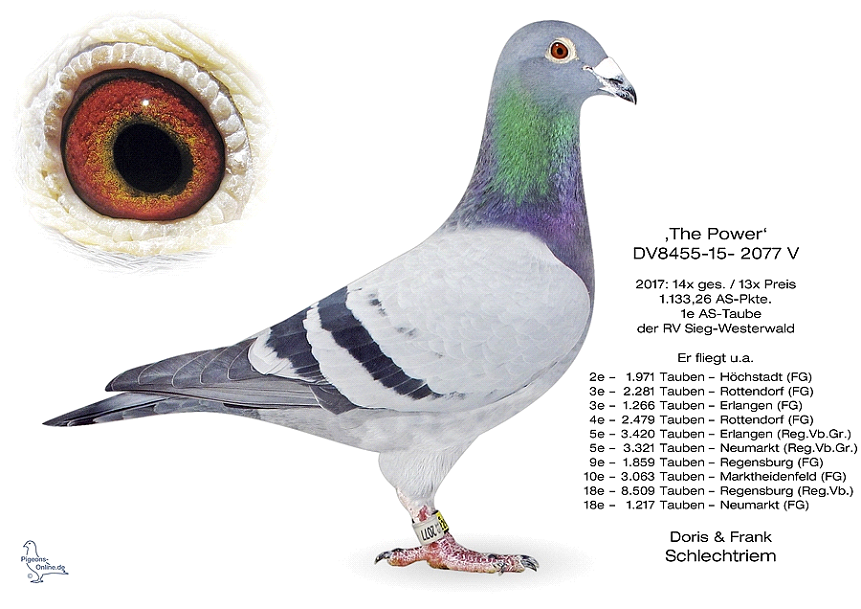 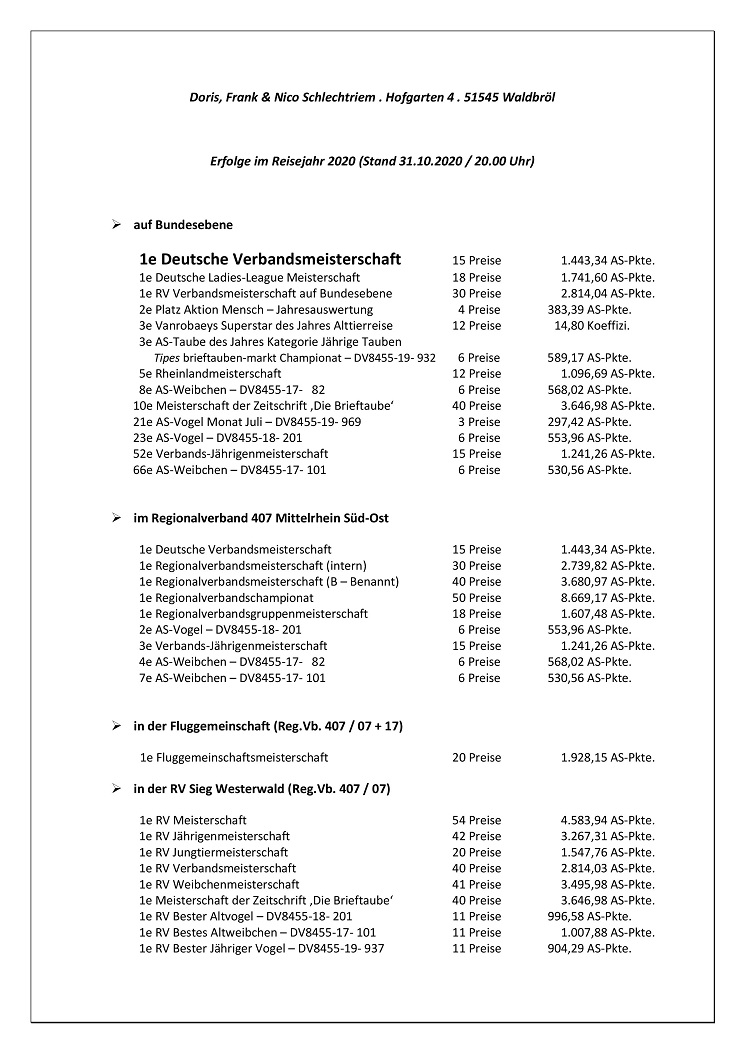 In the company Sieg Westerwald, starting with a flight speed of 1,340 m/min. until the 23rd prize, 21 bad-bred pigeons were placed, of which no less than 18 (in words eighteen) carried the blood of “The Great One” in their veins – in the Netherlands the question would be: Wie heeft ze beter? !!!